The debate is open about what cities have the best pizza. Over the years, Chicago and New York have duked it out, but there are many more cities that are adding their special crusts, sauces, and toppings to the battle. If you love a good pizza, you have many choices based the local flavors of cities around the United States.

Anyone who knows anything about pizza knows that there is a big difference between Chicago-style pizza and New York City-style pizza. Chicago pizza is known for having the deepest crust, with rich sauce and a plethora of toppings. The deep crust pizza does have extremely thick crust, but the toppings then become extremely thick as some deep crust pizzas are prepared in a pan that is between two- or three-inches thick. The cheese is usually on the bottom of the pile of toppings and then the rest of the toppings are piled above the cheese. This pizza is so flavorful  and thick that it must be eaten with fork.

On the flip side, the New York pizza is extremely thin. This type of pizza has a hand-tossed crust, just a small amount of sauce, but with a good coating of mozzarella cheese. Where Chicago-style pizza is meant to be enjoyed at a table, the New York-style pizza is meant to be eaten while walking down the street. New Yorkers will fold their pizza as they eat it, but Chicagoans cannot. Also, while the Chicago-style is purchased as a whole pie, New Yorkers only buy one slice at a time.

California Goes Its Own Way

Pizza in Hawaii – No Way 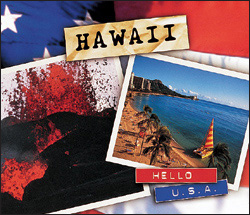 Like the Californians, the Hawaiians like to do things their own way. Hawaii is the land of the pineapple and of SPAM, so it is not unusual for the favorite dishes of Hawaii to include those two popular foods. The Hawaiian pizza has a traditional crust, but has bacon (instead of SPAM) and pineapple on mozzarella cheese. The interesting thing about Hawaiian pizza is that Hawaiians have no interest in eating it; so if you want to try it, you should go somewhere other than Hawaii.

The up-and-coming pizza in the United States happens to be found just south of Chicago in St. Louis. This pizza has a thin crust prepared in a dish with a little bit of depth (nowhere near the depth of the Chicago-style), but it has an unusual concoction of cheeses that set it apart from the rest. The cheese concoction includes provolone, Swiss, and American cheeses. The pizza is smaller than other options around the United States and the slices are not cut into traditional triangles; they are cut into squares.

Pizza truly is a source of pride for cities all over the United States as well as around the world. Share your pride and enjoy a slice of your favorite!